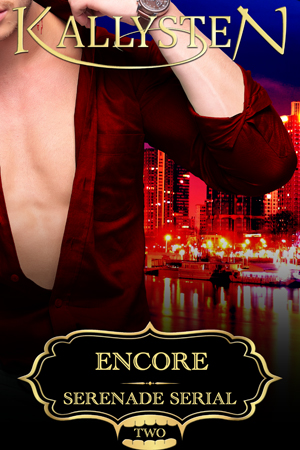 After spending a night with Rachid, vampire Irene is in a state of complete confusion. She’s been living for centuries, has met and bedded countless men, and she can’t understand what is so special about this one human. Just like she can’t understand how listening to him play her music on the piano touched something inside her so that she’s able to compose again after decades of being blocked.

Needing to hear him play some more – and possibly enjoy his company again – she returns to the piano bar where she first met him. But while Rachid is there as she hoped, it’s another man who approaches her, a vampire, who happens to be Rachid’s companion: Oliver. His interest in her music should flatter her, but instead she finds herself annoyed that he thinks he knows her music better than she does. She’s intent on putting him in his place… but whose side will Rachid choose?

NOTE – This book is the second part of the Serenade serial, which is available as 5 installments or 1 complete serial ebook.
It also belongs to the Compulsion Cycle series, in which each serial can be read independently.

Only available as a boxed set at this time