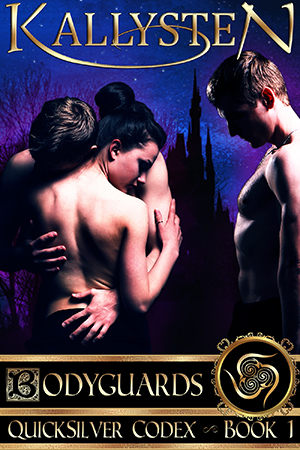 Magic, vampires, a secret realm… a new world awaits Vivien. Is she up for the challenges that come with it?

Everything changes for 20-year-old Vivien when she steps into a terrifying knife fight. She can only watch in horror as her long-time crush and classmate, Brad, kills a man. Except, it’s not Brad but his twin brother who wields that knife. After he ushers her to safety, he and Brad tell her a story of a princess in hiding from a tyrant. A story in which she is the princess.

As Vivien’s bodyguards, Brad and Aedan’s duty is to protect her from the usurper king. Now they have to convince her it’s time to reclaim her throne – not an easy feat when everything Aedan says antagonizes Vivien, while Brad lets his love and desire for her overwhelm him.

All Vivien wants is to return to Earth with Brad and forget this dangerous world. But if that’s her choice, they will all pay a heavy price…

NOTE – This is the first part of the QuickSilver Codex series, which is best read in order. This book is available for free to my newsletter subscribers.