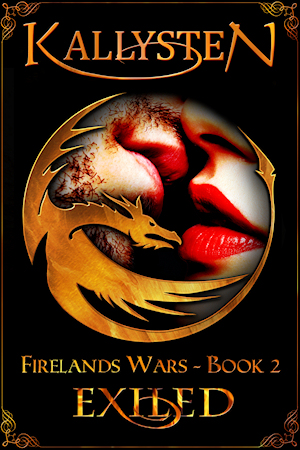 Should she get dressed? Her clothes were mostly dry, but they smelled like stale water—hardly an attractive scent. The bathrobe might be old, but if she decided to seduce Glenn, it’d be easy to loosen the belt a little and show off her cleavage and legs enough to be suggestive without being crass.

If you decide? Who are you trying to fool? You had your sights set on him before you even met him.

That much was true, she couldn’t deny it. But that had been purely business; after actually meeting him, she thought this might turn into something more. She only needed to get to know him better.

Checking the knot at her waist, she straightened the robe a little and opened the bedroom door and found Glenn standing on the other side.

His eyes dropped down to take in her attire, and despite herself she felt her cheeks warm up. Glenn cleared his throat as he met her eyes again.

“Hungry?” he asked, his voice a little rough.

“Starving. But if you haven’t been here in years I’m guessing there isn’t much food, is there?”

He scratched his cheek with a finger.

“Well, I did find a few things. Just… don’t expect gourmet food. I’m not that good of a cook in the best of circumstances.”

His crooked smile, as he finished, was infectious, and she couldn’t stop herself from returning it. The awkwardness from the car, when he’d been suspicious of her, seemed to have fully dissipated.

“Whatever it is,” she said, “it can’t be worse that the bag of chips I had for lunch.”

He let out a quick bark of laughter.

“I wouldn’t be so sure if I were you. Do you…” His eyes briefly dropped to her feet, and he frowned. “The floor is rather dusty. Do you want something to wear on your feet?”

She looked down and grimaced. Focused on keeping warm, she hadn’t even thought about that.

“I should put my shoes back on,” she said, but already Glenn was pushing his way into the bedroom and opening the trunk at the foot of the bed where he’d found the robe earlier. This time, he came out with a pair of thick woolen socks.

“They’re clean,” he said as he handed them to her. “Maybe not very attractive, but they’ll keep you warm and dust free.”

That last part was a little too late, Nadia soon realized when she sat on the edge of the bed, and she’d need to wash her feet again. For now, she brushed the dust off before slipping on the socks, all too aware that Glenn was watching her.

Ah, yes, long socks and a tattered bathrobe, you’re really going for sex appeal. How could he resist your charms?

Her cheeks were flaming when he offered her his hand to help her up, but she took it anyway, shivering a little at the contact.

“So.” She cleared her throat. “Let’s see about that gourmet meal, then.”

He led the way to the kitchen area and she sat on a stool at the kitchen island, where he’d already set two mismatched plates, equally mismatched porcelain mugs, and cutlery. While he busied himself on the other side of the island, where the contents of a saucepan were simmering on a gas heater, she looked at what else he’d placed on the table.

Crackers still in their plastic wrapper—stale, she guessed. A tin box with instant packages of coffee and hot chocolate, as well as a handful of tea bags. An almost-full bottle of scotch. Two packages of ramen noodles. A jar of crystallized honey.

Hardly a feast, and certainly not the kind of menu she’d imagined for their first dinner together, but it’d have to do.

“That’s going to be the strangest meal of my life,” she said.

“I wish I could say the same,” Glenn said, glancing back at her with a small smile. “What do you want to drink?”

She went for hot chocolate, opening a package and dumping the cocoa powder in the mug in front of her. Glenn did the same with a package of coffee before grabbing the saucepan and filling both mugs with boiling water. Returning the saucepan to the heater, he threw in the ramen noodles.

He turned back to the island and picked up the bottle of scotch. He uncapped it and poured a generous splash into his mug. He started closing the bottle again but stopped and gave a questioning look to Nadia. She shrugged.

She picked up the mug and cradled it in her hands as she watched him drain the saucepan and distribute the noodles in both their plates.

“You look like you’ve done this before,” she commented.

She continued to watch as he added the seasoning to the plates of noodles.

“How long did you live out here?”

He turned away to set the saucepan aside.

He gave her a slight frown before answering.

“Yes. Why so many questions?”

She raised the mug to her lips, grimacing a little when she found the drink still too hot to drink.

“I’m just curious, that’s all. This seems rather different from your diving school.”

He ate a couple of mouthfuls of noodles before he answered, and Nadia had to wonder why he needed so much time to think of a reply.

“It took me a while to figure out what I wanted to do.”

She had a feeling there was more to it than this trite explanation, but Glenn didn’t seem like he wanted to talk about it now, so she let the topic drop and worked on filling up her rumbling stomach. The best that could be said about the noodles was that they were edible, the stale crackers tasted a lot better covered in honey, and an extra splash of scotch in her chocolate cooled it down enough to drink.

As hungry as she was, she couldn’t fail to notice he was glancing at her with a slight frown every few seconds all through their meal, and when she finished her last bite, she just had to ask.

“What is it? You’ve been staring at me.”

“Nothing,” Glenn said, shaking his head, but as she crossed her arms he went on. “It’s just, you’ve been taking this a lot better than I’d have imagined.”

“Which part?” she asked dryly. “Being attacked by vampires or running away with someone I’ve known for less than a day?”

He barked out a quick laugh that held no amusement.

“Both. Most people would freak out about the vampires and call what I did bringing you here kidnapping.”

He probably had a point, but while she’d not expected a vampire attack, spending time with him was exactly what she needed.

“I’m not most people,” she said with a shrug. “I’ve been taught that freaking out rarely helps anything. It wouldn’t have made the vampires any less real. And screaming and crying or being catatonic wouldn’t have stopped them from trying to kill you. Or me.”

With a thin smile, Glenn poured another finger of alcohol in each of their mugs.

“I like the way you think,” he said simply, holding up his drink.

She picked up her own and clinked it against Glenn’s before drinking. She grimaced at the taste.

“I don’t know what’s worse,” she said, only half joking, “that scotch or the noodles.”