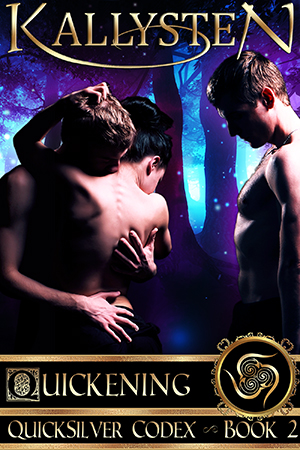 She won her first battle… but the war is only starting.

Raised on Earth, Vivien had no idea she was heir to a magical realm until her bodyguards, Brad and Aedan, revealed themselves to her and took her to her family’s ancestral castle. Her first confrontation with Rhuinn, the tyrant who usurped the throne, ended better than could be hoped and she won a few days of respite until she has to appear at the royal court again.

Before she does, however, she’ll need to break through the mental block that stops her from mastering the Quickening, the magical force that rules the lives of humans and vampires. Doing so, she will prove herself a worthy successor to her mother, the first step in finding the allies she desperately needs.

The most difficult part, however, might be to follow Aedan’s advice and learn to act like a queen when she’s still reluctant to claim the throne. Her love for Brad and the trust he placed in her keep her in Foh’Ran… but a treacherous attack might send her new world crashing around her.

NOTE – This is the second part of the QuickSilver Codex series, which is best read in order.