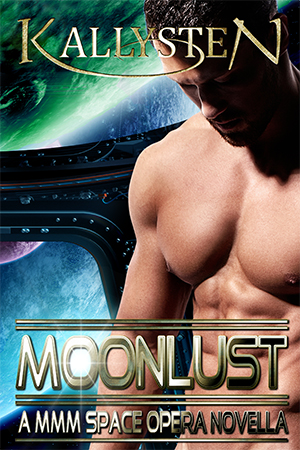 The job was supposed to be an easy one for Captain Kar and his two-man crew: land the Danaus on the deserted moon, appropriate a few boxes of precious chromore, and jump out of the system before the Guardians could get to them. Even Will and Jay’s inability to keep their hands off each other for any length of time should not have been too much of a problem.

They discover too late it’s the laineards’ mating season. The resulting sexual pheromones begin to affect them as soon as they step off the ship. With Will and Jay losing their minds to lust, and Kar himself blinded by visions of the two men he has wanted for months, things suddenly get much harder than expected.

Their only hope for not ending up in jail is to get out of there before the Guardians find them. Except an open loading dock contaminated the air inside the Danaus. And Kar will have to resort to drastic measures to keep Jay and Will apart long enough to escape…

NOTE – This book was previously published as part of the Men In Space collection.