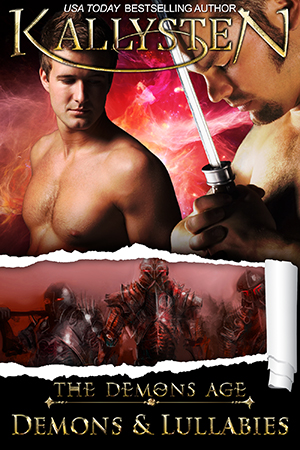 Some little boys want to be firemen or astronauts when they grow up. From the moment Jacob understood what his fathers did, he never wanted to do anything but fight demons.

Andrew, Jacob’s father and a vampire, fights demons because it’s a necessity: few others have the strength or skill to kill the strange creatures that started appearing the very night his son was born. He carries with him some guilt, too, and the suspicion that the magic that made Jacob’s very life possible also opened the way for the demons. The last thing he wants is for his son to ever join this fight and get hurt.

As the years pass, however, and Andrew watches Jacob grow up and grow more determined, he slowly has to accept there’s little he can do to deter his son. It doesn’t help that Nicholas, Jacob’s other dad and Andrew’s Childe, starts giving Jacob sword-fighting lessons under the cover of playing, or that Jacob discovers his mother’s diaries and comes to the same conclusion Andrew did concerning his origins and the demons’.

Through snapshots covering Jacob’s life from birth to adulthood, watch all three members of this unusual family change, grow up, and find their place in the world.

NOTE – This book is the last part of the Lullabies Trilogy. Rather than following a plot, it showcases snapshots of life over 18 years. It is not exactly a sequel to Fangs & Lullabies; instead, it covers the same years but from a different perspective.