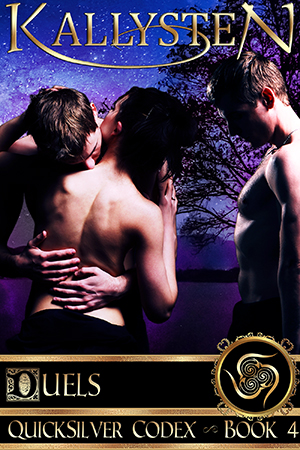 Who would have thought finding out she’s royalty and has magical powers would make Vivien’s life so complicated?

When Vivien challenged the tyrannical king Rhuinn for the throne, she wanted to reclaim her birthright and avenge her lover, Brad, whose human life ended on Rhuinn’s orders. But now that she has lost the first of three magical duels and Brad has left her to learn to control his vampire instincts, everything seems to be falling apart.

For Aedan, her bodyguard, watching Vivien stop believing in herself is just as difficult as watching her pine for his twin brother. He lifts her spirits by showing her all that she fights for, but mending her heart isn’t so easy, especially since he loves her but wouldn’t dream of acting on his feelings.

Everything accelerates with a fit of temper from Rhuinn that brings chaos to Vivien’s life, and death to her people. She battles Rhuinn for the second time… but the aftermath of the duel, as she confronts her feelings for both brothers, might prove even more deadly…

NOTE – This is the fourth part of the QuickSilver Codex series, which is best read in order.