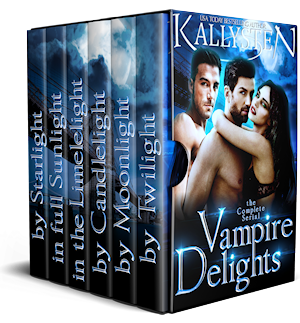 In the beginning, all I wanted was to explore the spark I felt toward Florian. After knowing him for over two centuries, it was more than time to see if there was enough between us to light fireworks for one night… or for more than that.

And boy, did we light up that night!

What I hadn’t imagined was that he already had someone in his life. Damon was a vampire like us, and while he and I started off on the wrong foot, we soon realized Florian’s bed was big enough for both of us.

It looked like the beginning of something special… until it came off to a screeching halt. Lies and jealousy will do that to a relationship.

Were we done for good, or was it time for a second chance?

Even vampires deserve to live happily ever after… don’t we?

NOTE – This boxed set gathers the 5 parts of the Vampire Delights serial with a bonus epilogue, By Starlight, which is also available to my newsletter subscribers.
It also belongs to the Compulsion Cycle series, in which each serial can be read independently.