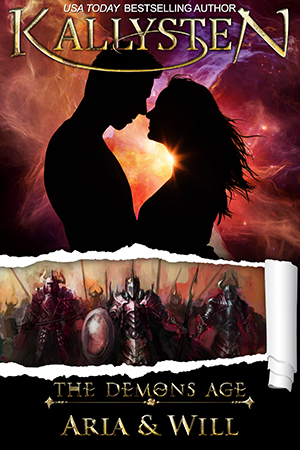 In a near-apocalyptic world, humans and vampires are allied against savage demons from a parallel dimension that relentlessly attack their cities.

In the fortified town of Newhaven, Wilhelm, a centuries-old vampire, has been fighting for so long and has lost so much that he’s not sure he remembers why he fights anymore. After a chance meeting with the human child Ariadne, he keeps a close eye on her, and makes sure she remains safe. Watching her grow up reminds him of his purpose and gives a face to the humans he tries to protect with renewed vigor.

As years pass, however, and Aria becomes a young woman, then a fierce fighter, his protectiveness slowly turns into something deeper. Refusing to grow too close to her, he places a young vampire onto her path and takes a step back.

From the moment she lost her father to the demons as a child, Aria knew she’d pick up a sword someday, and join the fight, regardless of her family’s disapproval. She just hadn’t expected Will, a close advisor to the Guard’s Commander, to disapprove as well. Nor had she expected to find out that he has feelings for her… or realize that she returns them.

With danger and death lurking out of every shadow, can they find a way to be together before their time runs out?

NOTE – While part of the Demons Age series, this book can be read as a standalone