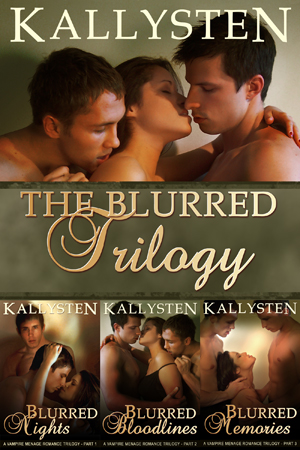 In a future world shattered by the invasion of beast-like demons, humans are fighting back as well as they can, using ancient weapons and magic to defend their cities. Next to them, vampires are fighting too – some for the thrill of it, others to hold on to age-old Pacts, which demand that they protect humans.

In this trilogy of novels, we watch two vampires, Blake and his Sire Marc, redefine the reasons why they fight demons and the nature of their relationship as they join a group of human fighters and fall in love with one of them, the fierce and fearless Kate.

In the midst of war, despite fights, injuries and betrayals, a three-way courtship takes place, bringing Kate closer to both men. However, when demons kidnap one of them, the emotional upheaval that follows puts everything in question again…